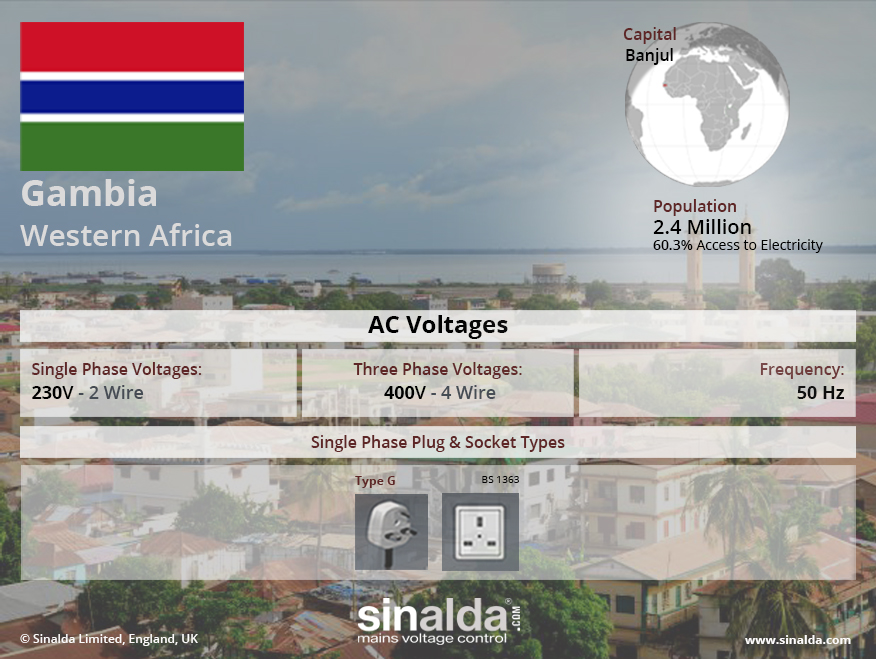 Power Quality in The Gambia

The Gambia’s power sector is in a poor state. For nearly five decades now Gambians have had to endure all too common voltage brownouts and power outages. These occurrences have seriously hampered the country’s economic development efforts. Most businesses and the more affluent households rely on off-grid sources, such a Diesel Generators, to keep the lights burning.

Power Sector in The Gambia

The Gambia is a country in West Africa that is entirely surrounded by Senegal except for its coastline on the Atlantic Ocean at its western end. It is the smallest country in mainland Africa. As of 2016, it is estimated that only just over one-third of Gambians have access to electricity, with a rural electrification rate of 25%. Following the Sahelian droughts of 1968 through to 1974, which saw a significant rural-urban drift of people from the villages to the towns, generation capacity has failed miserably in keeping up with demand.

Today, installed generation capacity is estimated to stand at 99 Megawatt (MW) being primarily derived from Heavy Fuel Oil (HFO) thermal power plants. However, it is estimated that at any one time only 50% of the capacity is available and of the electricity produced an ever-increasing amount is lost in the aging and poorly maintained transmission and distribution network.

In the Greater Banjul Agra (GBA) area, where in the summer months demand can easily exceed 70 MW, a lack of resources for maintenance in the power plants has led to a deterioration in available capacity to a mere 45 MW. At times in the past, the situation has been made even worse due to a lack of cash to purchase fuel to keep the operational generators turning.

Generation, transmission and distribution of electricity is the responsibility of the state-run National Water and Electricity Utility (NAWEC). The country’s main power station is based at Kotu in Banjul, the capital of The Gambia. Provincial areas are serviced by six smaller power plants which have their own transmission and distribution networks.

With tariffs set too low, NAWEC is in a dire financial predicament and is widely reported to be unable to cover its operational expenses, whilst at the same time servicing a mushrooming debt of 9 billion Dalasi (approximately US$200 million).

Institutional and structural reforms are desperately needed to transform NAWEC into an efficient, financially viable concern. Without these reforms, most commentators agree it will not be possible to balance the needs of short-term supply, whilst at the same time being able to reduce generation costs to make the sector more financially attractive to private investors and Independent Power Providers (IPPs).

While the current situation looks bleak, in the future things should improve. President Adama Barrow’s new government, supported by The World and African Development Banks, is actively seeking private sector involvement, with IPPs and imports being the governments preferred choice for scaling up future generation capacity to meet an anticipated demand of 200 MW by 2025.

While the availability of new generation capacity should greatly improve availability, a substantial public investment by 2025 of US $133 million in the transmission and distribution infrastructure will still be necessary to handle new generation capacity, reduce transmission and distribution losses, and expand access. By 2030 the Gambia is committed to ensuring that at least 66% of the population has access to electricity, with 100% access in urban and 36% in rural areas.

Given the volatility in petroleum prices, the new government has recognised that developing new local and renewable resources is critical to meeting its economic objectives; and has therefore indicated its desire to promote renewable energy. It has publicly stated that it wishes to reduce the near 100% dependence on expensive HFO generation to less than 60% by 2025.

The Gambia’s geographical location gives it plenty of sunlight hours. The country receives 2,500 hours of sunshine yearly and the daily solar energy potential is an average 2.5 kJ per square centimetre area (2.5KJ/cm2). The government is actively encouraging the use of alternative energy and the use of solar PV cells and associated equipment is on the rise be it for domestic, commercial or industrial use.

While the government’s plans are highly commendable they assume political stability and an end to endemic corruption in the public sector – no mean feat! Most commentators agree that the plans could very easily be derailed.

Whether in the future The Gambia can finally enjoy a reliable and stable electricity supply remains to be seen.