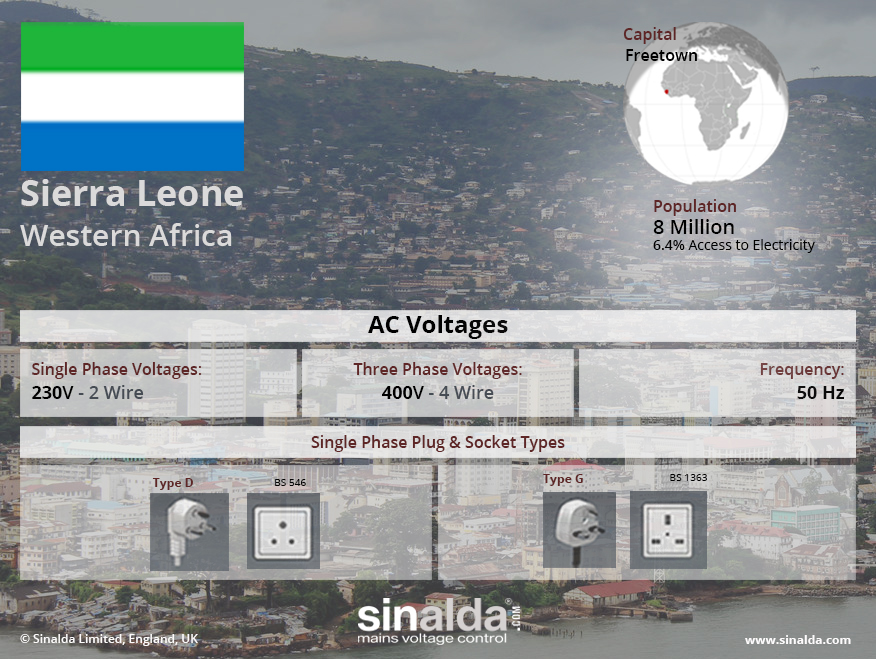 Still recovering from the devastating Civil War of 1991 to 2002, where much of the country’s infrastructure was destroyed, and the humanitarian crisis following the outbreak of Ebola in 2014, the reliability of the power supply in Sierra Leone is exceptionally poor, being characterized by extreme voltage variations, load discharges and frequent and long outages.

Electricity reaches less than 13 percent of the population. This sparse electricity coverage and unreliable service exacerbates poverty conditions among Sierra Leonean citizens, and frustrates productivity and competitiveness of firms.

The power supply in the country can at best be described as sporadic. Most of the electricity supply (90%) is restricted to the main four cities of Freetown, Kenema, Bo and Makeni.

Uninhibited demand for electricity in Sierra Leone is estimated at 500MW; more than five times the current total national generation capacity of 100 MW.

In the Freetown peninsula, electricity supply is only available to customers for a few hours every week. With rural access to electricity estimated to be only 1%, most areas in the interior of the country are wholly, or largely, without access to grid electricity.

The Kingtom Station is aging and is in a poor condition being unable to ensure the delivery of a reliable and stable supply. While Bumbuna hydro plant has the ability to generate 50 MW, during the long dry seasons the reservoir often runs dry, leaving much of the capital, Freetown, in darkness.

Addressing these acute power problems is essential to boosting economic growth in Sierra Leone. Commentators estimate that around $3 billion of new investment is required in the sector over the coming years in both generation and the network to distribute the power to homes and businesses.

As such the government has focused in the last few years on unbundling the National Power Authority (NPA) which is responsible for the sector into two utilities – Electricity Generation and Transmission Company (EGTC) & Electricity Distribution and Supply Authority (EDSA) – and also trying to set up an independent regulator.

By these actions they wish to establish a more solid management and organizational structure for the national electricity distribution utility and identify a clearer road map for improvements in the sector. With a more financially-viable electricity sector they hope the sector will be more appealing to much needed private investors.

In order to improve the current situation and to encourage increased mining operations in Sierra Leone, the government wants to increase its power generation capacity tenfold by 2017. To achieve this the Sierra Leone’s Ministry of Energy and the US National Rural Electric Cooperative Association (NRECA) announced in October 2014 a transmission and distribution investment plan valued at US$3.5 billion.

The plan will be used by the government to expand reliable electricity services to Freetown and surrounding areas. Funded by the World Bank, this project will ultimately support a larger expansion plan that will not only serve the capital, but also the entire country.

However, given the inevitable delay in getting the ambitious plan of the ground, there is likely to be no quick fix available for the country’s power problems. In the short to medium term Sierra Leoneans should expect more of the same – voltage variations, load discharges and frequent and long power outages.