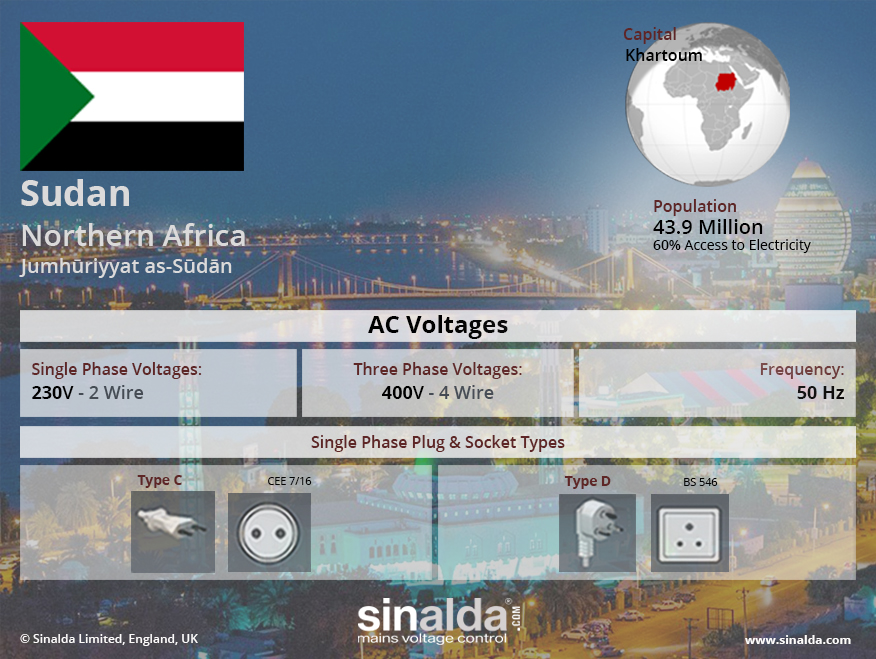 Following the end of the second civil war in Sudan in 2005, the country’s generation and transmission infrastructure was found left in a run-down state with a huge need for new investment. While today the country continues to strive to modernise and extend its power generation and distribution networks, the ever growing demand for power regularly exceeds supply availability, resulting in frequent power outages and prolonged voltage brownouts.

Riots in Sudan – Sept 2013In 2013, and again in September 2014, the Sudanese took to the streets in Khartoum violently protesting against the state of the nation’s mains supply.

Sudan is one of the largest countries In Africa. In July 2011 South Sudan was separated and became an independent country.

National Electricity Corporation (NEC) is the state-owned electricity company in Sudan. It is a statutory corporation under the Ministry of Energy and Mining (ME&M) and is responsible for electricity generation, transmission and distribution in the country.

It is estimated that the total installed generation power capacity in Sudan in 2013 amounted to 2,533 MW, with about 70% of the electricity being consumed in the Khartoum area. Domestic power consumption dominates the market, with approximately 65% of electricity consumption being attributable to the sector.

With the grids only covering a small portion of the country, the parts not connected to the grid depend on off-grid expensive and inefficient diesel-fired generators or firewood to generate power. Erratic power supplies (outages stood at 19 days per year on average in 2009) have contributed to a high level of private generator ownership, particularly in the commercial and industrial sectors.

Hydroelectricity is Sudan’s largest source of on-grid power, accounting for 68% of generation in 2011, followed by diesel and heavy fuel oil (27%) and biomass and waste (5%). Hydroelectricity is generated from five dams at Roseires, Sinnar, Jebel Aulia, Khashm el-Girba, and Merowe. The newest hydro plant, Merowe, is located on the Nile River and has the country’s largest generation capacity at 1,250 Megawatts (MW).

Although power generation has more than tripled since 2000, millions of people are still without access to on-grid electricity. More than 70% of the population live in rural and isolated communities and it is estimated that only 30% of Sudan’s total population currently has access to electricity, however the government has ambitious plans to increase coverage to 90% by 2031.

In order to achieve this 90% target, large investments into the medium and low voltage distribution grids are being made and the government is actively looking for foreign direct investment. However, with a weak economy and a growing population, most commentators agree that the investment being made will be insufficient to reach the target within the government’s allocated time frame.

While 2014 saw the long awaited linking of the power grids of Ethiopia and Sudan, enabling the much needed importation of cheaper and cleaner hydropower from Ethiopia, in the short to medium term supply availability and reliability is likely to be one of the major factors in limiting the nation’s economic growth and prosperity.