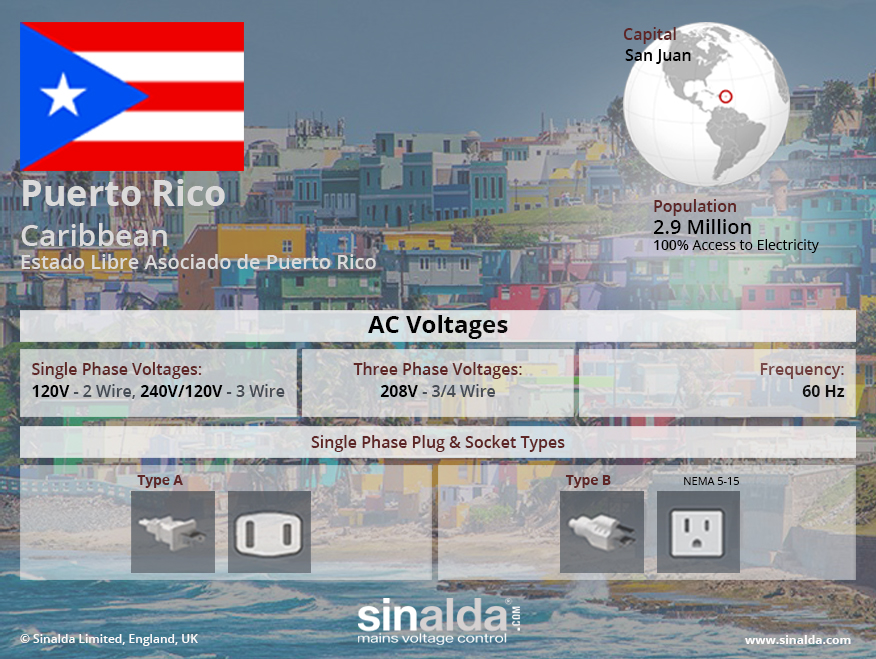 With Puerto Rico continuing to struggle to come to terms with a decade long economic slump and financial crisis, the poor management and lack of investment in new modern generation, transmission and distribution infrastructure means the reliability and quality of the electricity supply is becoming less dependable  – being characterized by more and more frequent voltage variations and power outages.

With a population of 3.5 million, it is reported that Puerto Rico enjoys a near 100% electrification rate.

The Puerto Rico Electric Power Authority (PREPA) – Spanish: Autoridad de Energía Eléctrica (AEE) – is the government entity authorized and responsible for all electricity generation, power transmission and distribution across the entire main island of Puerto Rico and its two adjacent islands of Vieques and Culebra.

With the power stations primarily situated in the southern part of the main island, in 2015 it was reported that 51% of total electricity production was petroleum based, 31% Liquid Natural Gas, 16% coal, and approximately 2% from renewable resources. Of the renewable resources, two thirds came from the commonwealth’s two wind farms, with 95 MW emanating from the Caribbean’s largest wind farm at Santa Isabel.

Current total generation capacity is estimated to be 5,839 MW, with 961 MW being derived through Power Purchase Agreements with independent providers. Peak demand is reported to be 3,685 MW, leaving in theory about 50% more capacity than is presently required. Unfortunately, this apparent excess generation capacity does not factor in the unreliability of an aging and poorly maintained system – as experienced in late September 2016, when nearly half of the islands population were left without power for several days following a fire at the Aguirre Power Station.

When you think of Puerto Rico, you inevitably think of tropical beaches and glorious weather. However, the island is positioned in the path of many of the tropical storms and hurricanes that cross the Greater Antilles during the hurricane season from June through to November. More than 90% of the PREPA’s transmission and distribution system is above ground, making it particularly vulnerable to the high winds, torrential rains, and erosion that is commonly associated with tropical storms and hurricanes. As a result, power blackouts, voltage fluctuations and surges are not uncommon occurrences during the hurricane season.

In the past, the Puerto Rican economy depended heavily on Section 936 tax incentives given to US mainland companies to set up operations on the island. It is estimated that these incentives generated directly over 100, 000 jobs on the island (23,000 in the pharmaceutical industry) and an additional 200,000 indirectly. In 1996 the US Congress voted to phase out this tax relief by 2006 and, not surprisingly, by 2014 over half of these jobs were lost. Since the ending of these tax reliefs Puerto Rico has been trapped in a decade long economic slump which has resulted in the build-up of a US $70 billion public debt. Today, it is widely reported that 46.2% of Puerto Ricans live below the poverty line, with the population emigrating at an ever alarming rate and property prices at their lowest level for 15 years.

Of the territory’s US $70 billion debt more than US $9 billion is owed by PREPA and they regularly struggle to make scheduled payments to their creditors. Most commentators agree this debt has arisen due to decades of poor working and financial practices (including borrowing to meet operational expenses), political mismanagement and a willingness of lenders to continue to lend to an organisation that is obviously in ever increasing financial distress. In June 2014 Fitch Ratings downgraded the investment rating of the authorities to BB (‘Junk Status’).

PREPA gets almost half its electricity consumption from the commercial sector and just over a third from the residential sector. In recent years high world petroleum prices coupled with antiquated and expensive to run and maintain infrastructure and delivery systems has resulted in Puerto Ricans paying more than twice as much for the electricity they consume than consumers in the US. With the public angered by the price they pay, the situation is made even worse by the fact that nearly a third of PREPA’s reported 1.5 million customers received subsidised tariffs that mean they pay little or nothing for the electricity they consume. These subsidised customers include many large users, with city governments and hotels being exempt from any payments at all.

Moving forward, most observers agree that to solve the islands economic difficulties it is essential that the financial and management crisis at PREPA is resolved as part of the process. Many of these commentators believe that reform of PREPA will only come about through privatising the public utility, thereby enabling much needed new vision, management skills and capital to be introduced.

Unfortunately until such time as the economic problems on the island are resolved, it is our considered view at Sinalda (UK) that the power quality on the island will continue to deteriorate, or, at best, remain the same.