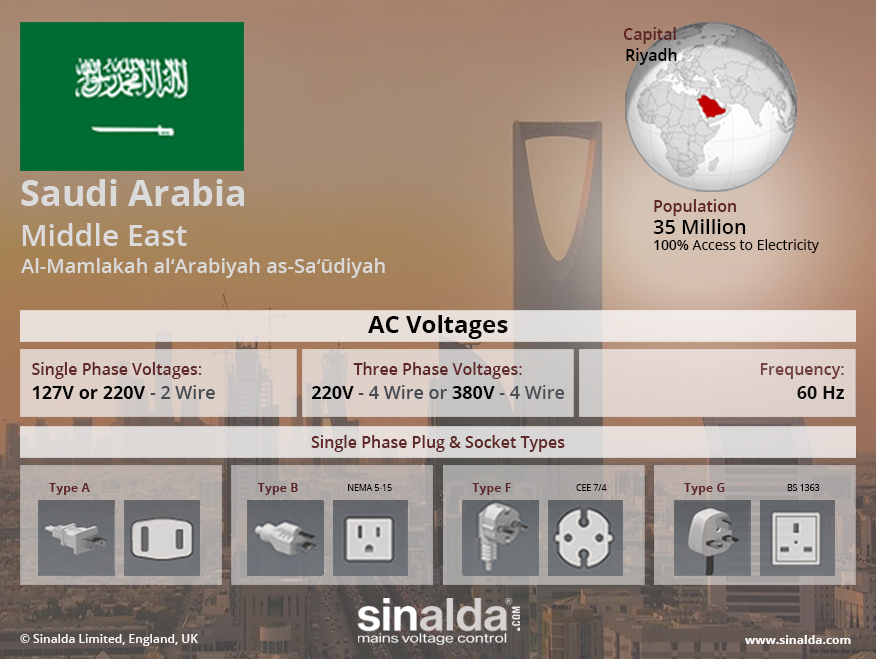 With an ever growing population and burgeoning economy, electricity consumption has risen significantly over the last 25 years. Much of Saudi Arabia’s electric power-generating capacity was built during the 1970s and 1980s and the supply often struggles to meet demand. As a result voltage fluctuations and power outages are not uncommon – especially over the peak demand summer months.

Saudi Arabia is a large country with an area of 2.3 million km². The Saudi Electric Company (SEC) is responsible for generating and distributing electricity in the Kingdom.

The power grid system is massive, supplying electricity to approximately 80% of the population. With an electricity distribution network that extends to cities, towns and villages across the country, its network consists of 8,750 miles of transmission lines, 52,000 miles of distribution lines and over 53,000 miles of service connections centres. In the more remote sparsely populated regions of the Kingdom it is uneconomical to extend grid access and as a result these areas tend to rely on independent /off-grid sources for electricity.

The country currently utilises a dual-voltage power distribution system. In residential and light commercial buildings the Kingdom uses 127 volts, whereas 220 volts is required in for larger commercial and industrial applications. With more than 70% of the world now using a 230/400 volt distribution system, the government approved plans in August 2010 to move the country to a 230/400 volts system.

In Saudi Arabia the demand for electricity is growing faster than in any other country in the region. Because of air-conditioning needs, electricity demand in the summer is around 40% higher than in the winter months. Base-load and peak-load demand differ widely between day and night. As a result, total installed power capacity needs to be considerably above base-load requirements.

Historically, fuel prices in the country have been heavily subsidised and commentators argue that this has encouraged wasteful consumption and discouraged investment in energy efficiency and alternatives to fossil fuels. It is estimated that currently electricity sources are 65% derived from oil fired power stations, 27% from Natural Gas stations and 8% from desalination / steam plants. With rising domestic energy demand, the demand for oil to supply the oil power stations is affecting Saudi Arabia’s oil export capacity and it is argued that Saudi Arabia could in fact turn into a net oil importer by 2030 if current demand growth patterns continue.

Consequently, finding new energy sources and the management of current domestic demands are considered to be high policy priorities.

To help meet the peak-load demand during summer months and the demands of remote sites that are not serviced by the grid, there is a growing realisation that the country needs to move to more renewable energy sources for electricity generation.

As a result a number of new initiatives have been introduced.

At the 2012 United Nations Climate Change Conference in Qatar, Saudi Arabia announced its target is to receive a third of its electricity demand from solar power with 41GW of solar capacity, by 2032. At the same time, it was announced that the country intended to invest in seventeen new nuclear reactors over the next 20 years.

Also Saudi Arabia has begun working with other GCC countries (Cooperation Council for the Arab States of the Gulf) to link their national power grids. Ultimately, plans include linking the GCC grid with the rest of the Arab world and Europe, through Turkey and Syria.

With the United Nations projecting that the population will grow from 28 million in 2010 to 45 million in 2050 ensuring there is sufficient electricity generating capacity to satisfy demand, both now and in the future is proving to be a major challenge for the Saudi authorities.

Chat to us
Latest News